Strange teachings from the First Presidency of the Mormon religion 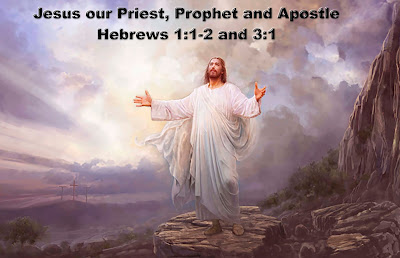 The teaching I'm going to show come from this book 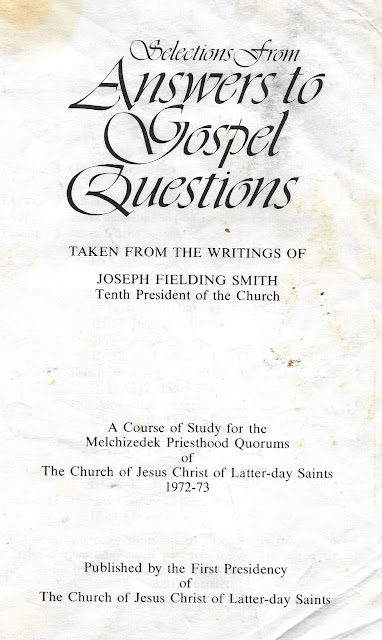 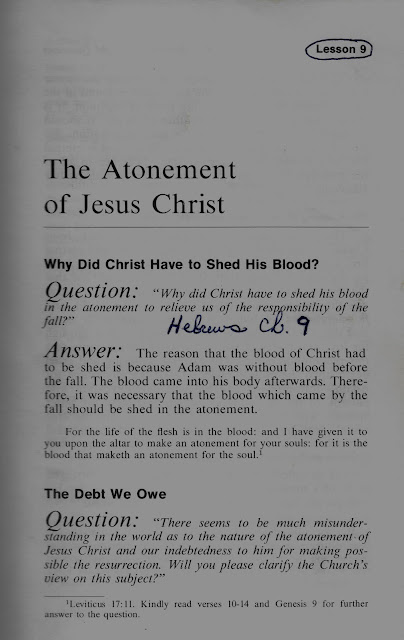 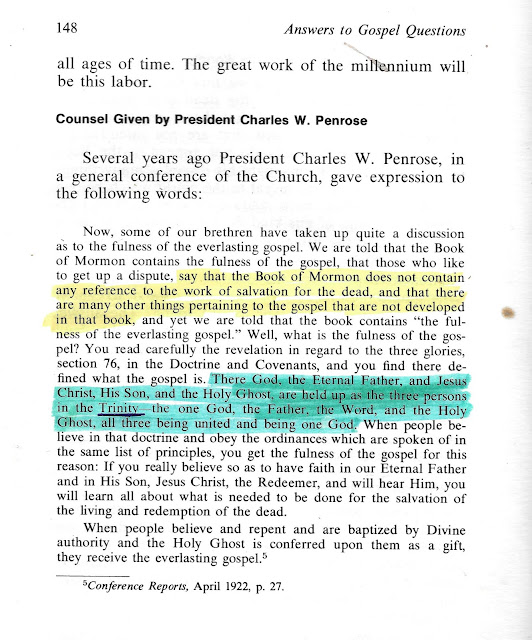 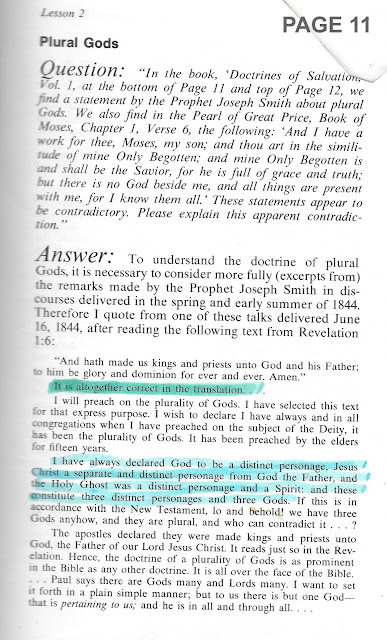 Rev 1:6 And unto him who loved us be glory, who washed us from our sins in his own blood and hath made us kings and priests unto God, his Father. To him be glory and dominion forever and ever. Amen. 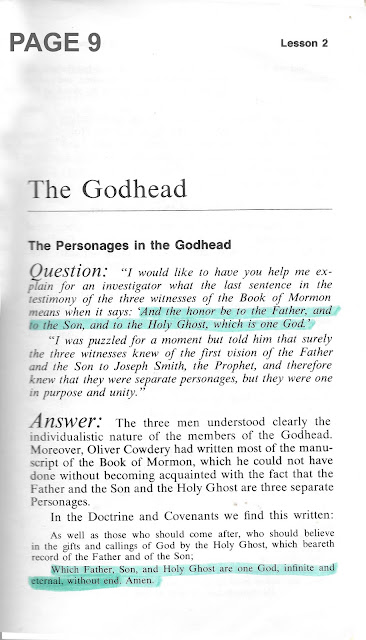 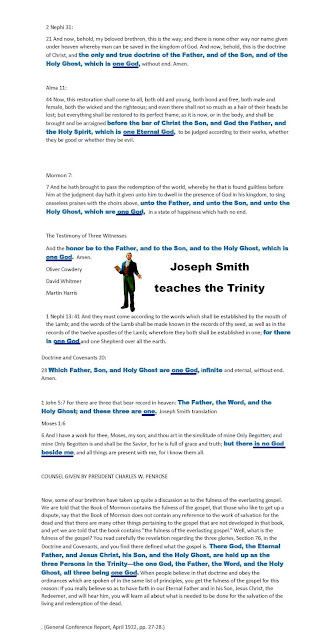 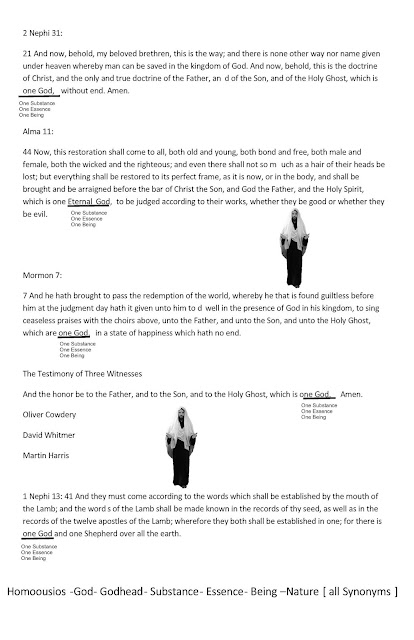 The God of Abraham, Isaac, and Jacob, and the God of the Athanasian Creed

Question: "May I raise a question about one of your statements? You state that in the year A.D. 325 the bishops of the church 'rejected the God of Abraham, Isaac, and Jacob, and substituted the Athanasian Creed.' For me this statement needs clarification. May I inquire in what respect 'the God of Abraham, Isaac, and Jacob' differs from the God as stated in the Athanasian Creed?"

Answer: The God of Abraham came down to visit Abraham and instruct him on several occasions, as he did likewise to others of the prophets. So Abraham became acquainted with our Heavenly Father and knew him. All I need to do to show that the God of Athanasius is not the God of Abraham is to refer to three points. 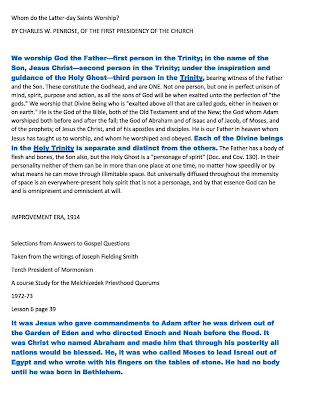 1. The creed says that God is "incomprehensible," confounding the Father, Son and Holy Ghost. This certainly is in conflict with what is written in the scriptures:

And they shall teach no more every man his neighbour, and every man his brother, saying: Know the Lord: for all shall know me from the least of them even to the greatest, saith the Lord: for I will forgive their iniquity and I will remember their sin no more. (Jeremias 31:34. (All references for this answer are quoted from Challoner's Authorized Catholic Bible. Same references can be checked in the King James Version.))

Then in that wonderful soul-stirring prayer of our Savior to his Father, shortly before his crucifixion, he prayed:

Now this is everlasting life, that they may know thee, the only true God, and him whom thou hast sent, Jesus Christ. (John 17:3.)

The Bible and Book of Mormon are clear God is incomprehensible

These verses teach that not only is God’s whole being incomprehensible but each of his attributes—his greatness, power, thoughts, ways, wisdom, and judgments—are well beyond human ability to fathom fully. Not only can we never know everything there is to know about God, we can never know everything there is to know about even one aspect of God’s character or work.
James E. Talmage Mormon faux Elder
Articles of Faith
Chapter 2
God is Omniscient—By Him matter has been organized and energy directed. He is therefore the Creator of all things that are created; and "Known unto God are all his works from the beginning of the world." 58 His power and His wisdom are alike incomprehensible to man, for they are infinite. Being Himself eternal and perfect, His knowledge cannot be otherwise than infinite. To comprehend Himself, an infinite Being, He must possess an infinite mind. Through the agency of angels and ministering servants He is in continuous communication with all parts of creation, and may personally visit as He may determine.
Mormon 9:16
16 Behold, are not the things that God hath wrought marvelous in our eyes? Yea, and who can comprehend the marvelous works of God?

SCRIPTURES ARE CLEAR ON DOCTRINE OF GODHEAD

2. The creed is at fault in stating that there are not "three Eternals" but "one Eternal," thus confounding the Father, the Son and the Holy Ghost, when the scriptures are definitely clear that the three members of the Godhead are separate and distinct from each other; each with a definite mission to perform. The Savior told his apostles that when he went away he would send them the Comforter, who is the Holy Ghost.

But the Advocate, the Holy Spirit, whom the Father will send in my name, he will teach you all things, and bring to your mind whatsoever I have said to you. (John 14:26.)

Here we have the promise that the Son would go but the Advocate, or Holy Spirit, would be sent to be with the apostles.

3. In the fact that the creed declares that in the Trinity, "None is greater or less than Another, but the whole Three Persons are Co-Eternal together, and Co-Equal" we find a conflict which is contrary to what is written in the scriptures. Arius, at that council, tried to establish one truth that was rejected. That is, that there never was a Son that was not younger than his Father, but the creed emphatically declares that the Son, as well as the Father, is "Uncreate." 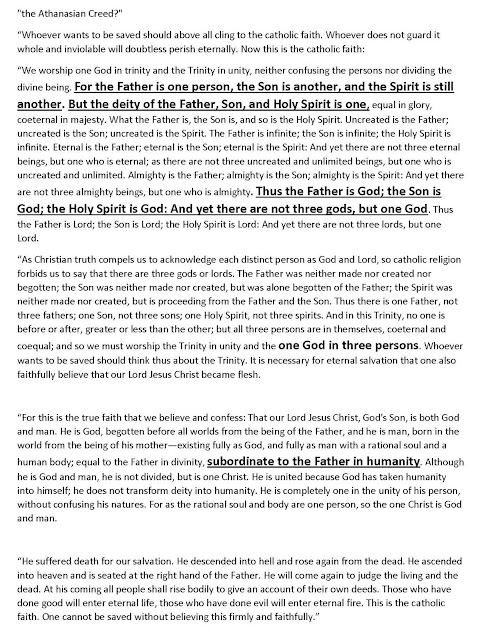 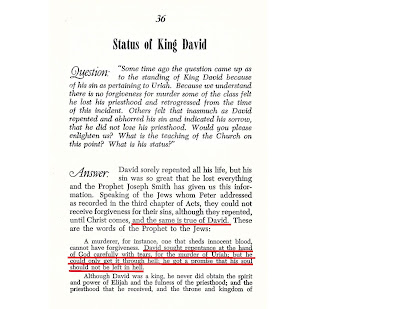 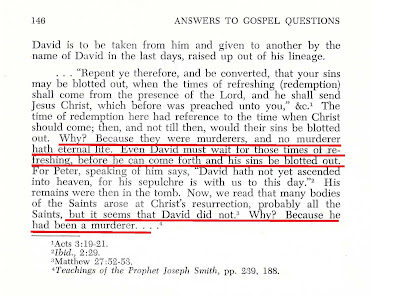 In Hebrews we find it written:

And again, when he brings the firstborn into the world, he says, And let all the angels of God adore him. (Hebrews 1:6.)

If Christ is the Firstborn, it must have been in the pre-existence before the earth was formed. According to what is written we are all the offspring of God, as Paul declared in Athens:

For in him we live and move and have our being, as indeed some of your own poets have said,

For we are also his offspring.

If therefore we are the offspring of God, we ought not to imagine that Divinity is like gold or silver or stone, to an image graven by human art and thought. (Acts 17:27-29.)

Christ is, of course, the Only Begotten Son of God in the flesh.

For God so loved the world that he gave his only-begotten Son, that those who believe in him may not perish, but have life everlasting. (John 3:16.)

DISTINCTION EMPHASIZED BETWEEN FATHER AND SON

Contrary to the creed, Jesus Christ has said:

You have heard me say to you, if you love me, you would indeed rejoice that I am going to the Father, for the Father is greater than I. (John 14:28.)

Jesus answered them and said, My teaching is not my own, but his who sent me.

If anyone desires to do his will, he will know of the teachings whether it is from God, or whether I speak on my own authority. (John 7:16-17.)

For he must reign, until he has put all his enemies under his feet.

And the last enemy to be destroyed will be death.

For he has put all things under his feet. But when he says all things are subject to him, undoubtedly he is excepted who has subjected all things to him.

Moreover, when Jesus prayed in Gethsemane he prayed to his Father, saying:

Thus he sought in prayer something which the Father denied him.

These passages are a few which show that the Athanasian Creed was not inspired by the Father, but was man-made. On the occasion there was no revelation given; nor was one sought. To the contrary, men contended, bitterness followed, and there came a division among them. They had no prophet to speak, no divine word of the Lord was received, but merely the opinions of men who lacked inspiration. 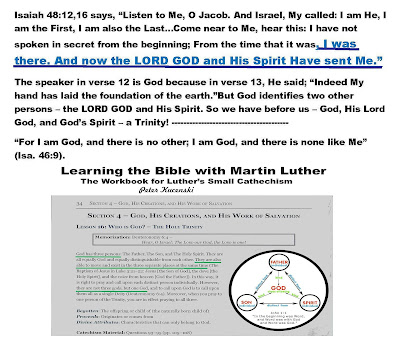 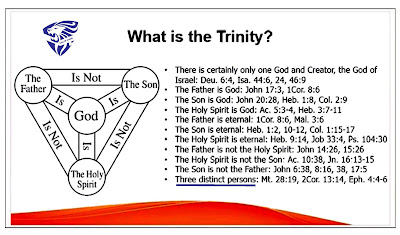 Posted by creeksalmon at 8:36 AM