From Ezek. 37:15-17 Mormons claim: (1) the sticks are really scrolls; (2) the stick of Judah is the Bible; (3) the stick of Joseph is the B. of M.; and, (4) the joining of these sticks means the joining of two writings - the Bible and the B. of M.. But the Hebrew word translated "stick" means a piece of wood, not a scroll. The Lord also told Ezekial precisely what to write on the two sticks, and it was not the "Bible" and the "B. of M." He was told to write the words "for Judah" on one stick and "for Joseph" on the other. The Bible speaks of books and scrolls in many verses, such as: Is. 8:1; 34:4; Jer. 36:2; Ezek. 2:9; 3:1-3; Rev. 6:14. It also speaks of sticks in Num. 17:1-8; 15:32; I Kings 17:12. But God never interchanges these words. The people asked in Ezek. 37:18, "Wilt thou not show us what thou meanest by these?" That question is answered in the next few verses, when the Lord declared the two Kingdoms of Israel would be brought together as one nation with one King again. In fact, the entire chapter is a prophecy of the restoration of Israel to her own land after captivity. For LDS to claim a couple of verses are about the B. of M. in the middle of that message would be out of place. Furthermore, it was Ezekial who wrote on both sticks. Did Ezekial write both the Bible and the B. of M.? If not, the Mormon interpretation does not fit this text.

Mormons also claim that Is. 29:1-4 predicts the coming forth of the B. of M. Apostle LeGrand Richards says of v. 4, "Obviously, the only way a dead people could speak 'out of the ground' or 'low out of the dust' would be by the written word, and this people did through the Book of Mormon. Truly it has a familiar spirit for it contains the words of the prophet of God of Israel" (M.W. &W., p. 69). There are 15 Old Testament references to "familiar spirits," and every one of them refer to mediums in witchcraft, including Is. 29:4 (Lev. 20:6; Duet. 18:10-12). If the LDS believe the B. of M. has a "familiar spirit," they are identifying it with witchcraft! But, this text is really talking about the destruction of Ariel or Jerusalem, not about the B. of M.

LDS claim Is. 29:11-12 was fulfilled when Smith received and translated the gold plates. Martin Harris mortgaged his farm to pay for publishing the first edition of the B. of M. Harris desired to verify Smith's translation, so he took a copy of some of the "Reformed Egyptian" characters with Smith's translation to Professor Charles Anthon of Columbia University. LDS claim that Anthon pronounced the translation correct. Part of this event is recorded in the P. of G. P. J.S. History 1:63-65. But, Harris' visit to Anthon was very different from Is. 29:11-12. This text shows: (1) This is a parable and the subject is a vision, not a book. (2) The vision of the prophets of that day had become as meaningless to the people as the words of a book that was sealed. Isaiah was referring to the condition of the people at that time, and not about a book of some future time. (3) According to Harris, the professor said the translation was correct. Anthon could have said this only if he read it. But, Isaiah said the learned man could not read the book because it was sealed! The only way the professor knew the plates were "sealed" was because Harris told him they were. (4) In Isaiah the book went to the learned man first - then to the unlearned. But the Mormon story has the book of gold plates delivered first to the unlearned (Smith) who copied some of the characters with his translation on a piece of paper which was taken to the learned (Anthon). In Isaiah, the same "sealed book" was taken to both the learned man and the unlearned man. But, Anthon did not receive any book - sealed or unsealed! (5) In Isaiah, the book was delivered to the unlearned and he simply said, "I am not learned," and made no effort to read it or translate it. But, Smith claimed he did read the book, even though he was unlearned.

Apostle LeGrand Richards wrote, "Professor Anthon did not realize that he was literally fulfilling the prophecy of Isaiah" (M.W. & W., p. 50). But, Anthon did not believe he was fulfilling prophecy, because in a letter to E.D. Howe, a Painsville, Ohio, newspaper editor, he relates the event as a hoax and a scheme to "cheat the farmer [Harris] of his money" (and Harris did lose his money). 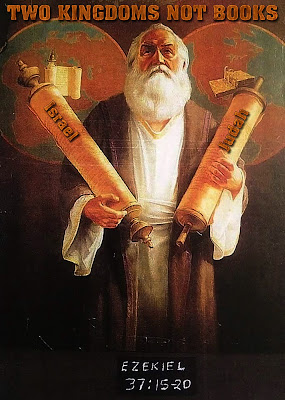 THE SCRIPTURES
1. By what name are the sacred writings of the Bible commonly known?
“Jesus saith unto them, Did ye never read in the Scriptures,The stone which the builders rejected, the same is become the head of the corner?”Matt. 21:42.
2. What other title is given this revelation of God to man?
“And He answered and said unto them, My mother and My brethren are these which hear the word of God, and do it.”Luke 8:21.
3. How were the Scriptures given?
“All scripture is given by inspiration of God.”2 Tim. 3:16.
4. By whom were the men directed who thus spoke for God?
“For the prophecy came not in old time by the will of man: but holy men of God spake as they were moved by the Holy Ghost.”2 Peter 1:21.
5. What specific instance is mentioned by Peter?
“Men and brethren, this scripture must needs have been fulfilled,which the Holy Ghost by the mouth of David spake before concerning Judas, which was guide to them that took Jesus.”Acts 1:16.
6. How does David express this same truth?
“The Spirit of the Lord spake by me, and His word was in my tongue.”2 Sam. 23:2.
7. Who, therefore, did the speaking through these men?
“God, who at sundry times and in divers manners spake in time past unto the fathers by the prophets.”Heb. 1:1.
8. For what purpose were the Scriptures written?
“For whatsoever things were written afore time were written for our learning, that we through patience and comfort of the Scriptures might have hope.”Rom. 15:4.
9. For what is all scripture profitable?
“All scripture is given by inspiration of God, and is profitable for doctrine, for reproof, for correction, for instruction in righteousness.”2 Tim. 3:16.
10. What was God's design in thus giving the Scriptures?
“That the man of God may be perfect, thoroughly furnished unto all good works.”Verse 17.
11. What estimate did Job place upon the words of God?
“Neither have I gone back from the commandment of His lips; I have esteemed the words of His mouth more than my necessary food.”Job 23:12.
12. Upon what evidence did Jesus base His Messiahship?
“And beginning at Moses and all the prophets, He expounded unto them in all the scriptures the things concerning Himself.”Luke 24:27.
13. What three general divisions did Jesus recognize as including all the writings of the Old Testament?
“And He said unto them, These are the words which I spake unto you, while I was yet with you, that all things must be fulfilled, which were written in the law of Moses, and in the prophets, and in the Psalms, concerning Me.”Verse 44.
14. What does God's character preclude Him from doing?
“In hope of eternal life, which God,that cannot lie, promised before the world began.”Titus 1:2.
15. What is God called in the Scriptures?
“He is the Rock, His work is perfect: for all His ways are judgment:a God of truth and without iniquity, just and right is He.”Deut. 32:4.
16. What, therefore, must be the character of His word?
“Sanctify them through Thy truth:Thy word is truth.”John17:17.
17. What test should therefore be applied to every professed teacher of truth?
“To the law and to the testimony:if they speak not according to this word, it is because there is no light in them.”Isa. 8:20.
18. What does God design that His word shall be to us in this world of darkness, sin, and death?“Thy word is a lamp unto my feet, and a light unto my path.”Ps. 119:105.
19. To what extent has God magnified His word?
“Thou hast magnified Thy word above all Thy name.”Ps.138:2.
NOTE.—God did this by backing His promises with an oath based upon Himself. Heb. 6:13, 14. By this He pledged and placed at stake His name, or character, for the fulfilment of His word.
20. In what is the true poetry of life to be found?
“Thy statutes have been my songs in the house of my pilgrimage.”Ps. 119:54.
21. How long will the word of God endure?
“The grass withereth, the flower fadeth: but the word of our God shall stand forever.”Isa. 40:8. “Heaven and earth shall pass away, but My words shall not pass away.”Matt. 24:35.

Joseph Smith  wrote: In the fly-leaf of his "version" appear these words: "The Holy Scriptures, translated and corrected by the spirit of revelation by Joseph Smith, Jr. the seer," 1927 Edition.

Was the Bible Completed by Joseph Smith?

Yes, in 1833 The official Church Historian, Andrew Jenson wrote: "Joseph Smith the Prophet finished the translation of the Bible."